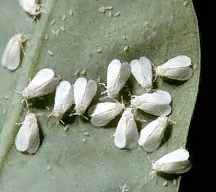 Photo by:
J. H. Robinson/Photo Researchers, Inc.
Whitefly, common name for any member of a family of plant-feeding insects that resemble tiny moths. Whiteflies actually are not flies; they have piercing-sucking mouthparts and are related to aphids, cicadas, and jumping plant lice. About 1200 species are known, mostly from tropical regions; about 100 of these inhabit North America.

Whiteflies usually occur in groups on the underside of leaves. The adults of most species are similar in appearance and are shaped like tiny moths. Most are less than about 2 mm (0.08 in) long. The body is usually yellowish, but the insects look white because of a mealy wax that covers the wings and body.

Females lay tiny, oblong eggs, usually on the underside of leaves. Eggs hatch into barely visible, oblong yellowish nymphs known as crawlers. After hatching, crawlers soon pierce the host plant with their needlelike mouthparts and remain settled on the plant until adulthood. The semitransparent nymphs become flattened and oval after the first molt, or shedding of the skin. They are covered with a waxy secretion and look like tiny scale insects.

Mature nymphs become temporarily inactive during the last growth stage. This stage is commonly called a pupa, even though whiteflies have incomplete metamorphosis and do not have a true pupal stage. The appearance of these "pupae" is used to distinguish among species of whiteflies. The pupal cover varies from transparent to whitish and may be either smooth or covered with curly wax scales.

Most species of whitefly have several generations each year, with all stages present year-round on the same host plant in areas with mild winters. The time required for whiteflies to complete a single generation can vary from several months during the winter to a few weeks during summer.

Whiteflies suck the flowing sap, or phloem, of plants. High populations of these insects may cause leaves to yellow, shrivel, and drop prematurely. The excess sap or sweet honeydew excreted by nymphs collects dust, leads to growth of sooty mold, and attracts ants. Like many other species in the aphid and cicada order, whiteflies can transmit viruses to plants.

Most whiteflies are uncommon because of natural controls, such as parasitic wasps and predaceous beetles, bugs, and lacewings. The few species that are pests occur primarily in greenhouses and outdoors in mild-winter areas. The greenhouse whitefly is a common pest of many ornamental plants, especially in greenhouse environments. It is sometimes controlled by release of parasitic wasps. The sweetpotato whitefly is a serious pest of many agricultural field crops. Recent outbreaks of this species in California and Texas have caused million of dollars' worth of damage. In extreme cases, the air around infested fields may be filled with choking, dustlike clouds of adult whiteflies.

Scientific classification: Whiteflies are in the family Aleyrodidae, order Homoptera. The greenhouse whitefly is classified as Trialeurodes vaporariorum and the sweetpotato whitefly as Bemisia tabaci.