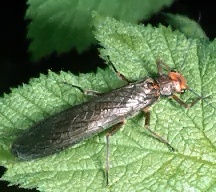 Photo by:
Milton Rand/Tom Stack & Associates
Stonefly, freshwater aquatic insect, the larvae of which occur on rocks in streams. Stonefly larvae live in cold, gravelly or mucky stream bottoms and are a key food for trout and other fish. Approximately 1600 species of stoneflies are found throughout the world, and more than 450 species occur in North America.

Adult stone flies range from 6 to 50 mm (0.25 to 2.0 inches) long. They are dull-colored, commonly gray, brown, green, or yellowish. Adult stoneflies have two pair of membranous wings that fold over the back when at rest. The wings have many veins, and the hind wing is broad at the base and fanlike.

Adults of most stonefly species live from a few hours to several days and do not feed. After mating, females commonly drop their eggs during flight over water. Females of some species can deposit over 1000 eggs. The eggs of most stonefly species have a sticky coating or anchorlike projections that help keep the egg in its original position until the larvae, called nymphs, hatch.

Stoneflies have incomplete metamorphosis: they gradually develop into adults after about two to three dozen nymphal instars, or growth stages. Nymphs have wing pads-saclike growths containing the developing wings-and two long tail filaments. In some species, the legs, wing pads, and tails are coated with many silken hairs. Other species have gill tufts protruding from various parts of the body. Immature stoneflies require moving water in which to develop. Nymphs of some species feed only on vegetation, others feed only on other stream insects, and still others feed on both. Many species have one generation per year, although larger species often require two or three years to complete development from egg to adult. Stonefly and mayfly nymphs look much alike and are often confused. However, stonefly nymphs are generally more robust and cricketlike than mayfly nymphs, and mayfly nymphs have three tail filaments rather than two.

Because the nymphs are aquatic, adult stoneflies are usually found near streams. Their presence is an indicator of a healthy stream environment. In areas with mild winters such as along the Pacific Coast, adults usually can be observed every month of the year. In cold climates a few species even fly in midwinter when snow is on the ground. In some locations enormous numbers of adult stoneflies may occur at about the same time each year. Adults can be collected near porch lights to which they are drawn. Stoneflies also commonly swarm along roads, annoying motorists by fouling windshields with their numerous bodies.