Everything About Insects: Crickets, Ants, Bees, Flies, Bugs, Fleas, Bookworms, Termites and others 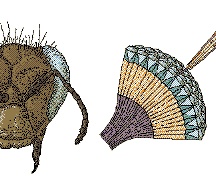 click to enlarge
Microsoft Illustration
Nervous System
The nervous system of an insect centers around a nerve cord that runs from the head to the abdomen along the underside of the body. Typically the cord is equipped with a pair of ganglia, or nerve centers, for each segment of the body. The brain, which is located just above the gullet, is made up of three ganglia fused into one. The brain receives stimuli from the antennae and from the eyes.

The sense organs of insects consist of eyes, auditory organs, organs of touch, organs of smell, and organs of taste. Insect eyes are of two types, compound and simple. Each of the two compound eyes, which are usually situated directly behind the antennae, contains from 6 to 28,000 or more light-sensitive structures, called ommatidia, grouped under a lens or cornea that is composed of an equal number of hexagonal prism-shaped facets. These structures permit only light that is parallel to their axes to reach the nerve endings, and thus they build up an optical image that is a mosaic of the light impulses reaching the individual nerves. Many species have in addition simple eyes, or ocelli, that are usually located between the compound eyes. Entomologists believe that the compound eyes are adapted to seeing swiftly moving objects, whereas the simple eyes are adapted to seeing nearby objects and fluctuations in light intensity. Each ocellus has a simple lens overlying a series of light-sensitive nerve elements, all of which are connected by a single nerve to the brain.

The auditory organs of insects vary widely in structure and in some species are quite complex. In some grasshoppers, large auditory membranes are situated on either side of the first segment of the abdomen. Behind these membranes are fluid-filled spaces that transmit the sound impulses to nerve endings that project into the fluid. Other types of grasshoppers and crickets have auditory organs on their legs below the knee joints. These organs consist of membranes with air chambers beneath them that communicate with the outside air through slits in their walls and are supplied with nerve endings. The organs of touch in insects resemble hairs and are located on various parts of the body and on the antennae. 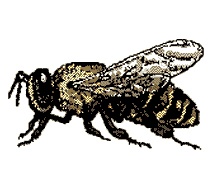 click to enlarge
Microsoft Illustration
Reproduction
The various species of insects exhibit extreme variety in their modes of reproduction. In some insects, such as the honey bee, the reproductive female, or queen, produces thousands of fertilized eggs over a period of several years, although the male, or drone, dies shortly after mating. In other species, such as the mayflies, both male and female insects have only a short span of life after mating. In a number of species of beetles, both males and females mate repeatedly. In addition, various species of insects reproduce parthenogenetically, developing from unfertilized eggs. This form of reproduction occurs regularly in certain species, and occasionally or in alternate generations in others. In some gall wasps and sawflies, all reproduction is apparently by parthenogenesis, and no sexual reproduction is known. In the social bees and other related insects, male insects are produced from unfertilized eggs. In certain moths, which exhibit sporadic parthenogenesis, both sexes may be produced from unfertilized eggs. Among the aphids several successive generations of females may be produced parthenogenetically before the production of a generation of male and female insects that reproduces sexually. 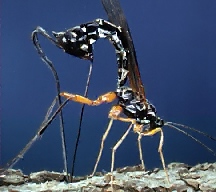 Photo by:
J.A.L. Cooke/Oxford Scientific Films
Certain flies occasionally reproduce by means of paedogenesis: the production of eggs by immature forms, either larvae or pupae. The larvae of some midges produce several generations of larval females before producing male and female larvae that develop into adult insects and reproduce sexually.

The method of development of eggs also varies widely among the insects. Some insects are viviparous, giving birth to living young. In other species, the entire larval stage of development takes place within the body of the female, and the insect becomes a pupa at birth. Most insect eggs, however, are deposited and hatch outside the body of the parent. The egg-laying habits of the different species vary. Many insects deposit single eggs or masses of eggs on the plants on which the larvae will feed. A number of insects lay their eggs within the tissues of the food plant, and the eggs may give rise to swellings, or galls, on the leaves or stems of the plant.

Certain insects show a unique form of embryonic development in which more than one embryo is formed by a single egg. This process is known as polyembryony, and in some species more than 100 larvae are formed from a single egg by division within the egg. 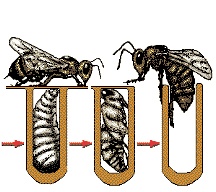 click to enlarge
Microsoft Illustration
Metamorphosis
One of the characteristics of the development of insects from birth to maturity is metamorphosis, the change through one or more distinctive immature body forms to the imago, or adult body form. Metamorphosis of some kind occurs in most insects, although in a few species, such as the bristletails, the newborn insect is essentially similar in form to the imago.

Entomologists recognize two basic forms of metamorphosis: complete and incomplete. In complete metamorphosis, the insect first assumes a larval form, an active immature form typified by the caterpillar; then changes to a pupa, a more or less dormant form, often enclosed in a cocoon; and finally emerges as the adult insect, or imago. A form of complete metamorphosis in which the insect larva undergoes one or more changes in form (usually to adapt it to a change in food supply) before becoming a pupa is called hypermetamorphosis. Hypermetamorphosis takes place in certain beetles and flies and certain parasitic insects of the order Hymenoptera.

In incomplete metamorphosis, the insect is born in a relatively mature form called a nymph, which resembles the imago but lacks or has only partly developed wings and reproductive apparatus. The nymph changes to the imago by a gradual process, and no pupal stage occurs. The nymphal stages are separated by molting, or ecdysis, of the inelastic exoskeleton, each successive stage being more like the adult. In the simplest insects, the changes between successive nymphal stages are slight, but generally the stages are distinctly different.

In a typical example of complete metamorphosis, the larva is a caterpillar that can crawl in search of food and that has mouth parts adapted for feeding on leaves or grasses. As the larva grows, it sheds its skin from three to nine times. At the end of the larval period, the insect spins a cocoon about itself or, in the case of most cutworms and certain other insects, forms an underground earthen cell and enters the pupal stage. During the pupal stage the insect is quiescent and does not eat, but its body gradually assumes the imago form. At this time the wings and other body structures of the mature insect begin to develop. When the pupa is fully developed, it breaks out of its cocoon or earthen cell and pupal exoskeleton and emerges as a complete adult insect, such as a moth or butterfly. 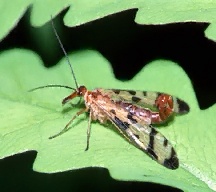 Photo by:
L. West/Photo Researchers, Inc.
Insect Attractant
Attractants are the visual, auditory, or chemical means by which male insects are attracted to females, and vice versa. Some insects, such as butterflies, attract members of the opposite sex by visual means; crickets, grasshoppers, and related insects use sound. In many insect species the females release small quantities of powerful chemical substances called pheromones that attract the males. Female saturniid and lasiocampid moths are reported to have lured males from 4 km (2.5 mi) away, and in one experiment a caged female pine sawfly attracted more than 11,000 males. In one method of insect pest control the attractant, generally a different chemical for each species of insect, is extracted from the females; or, if its structure is known, it is synthesized. 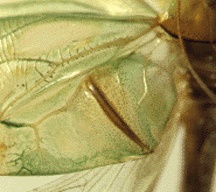 click to enlarge
Photo by:
Dorling Kindersley
The chemical is used to lure thousands of males of that species into contact with an insecticide and annihilation.

Fossil Insects
The earliest known fossil insects have been found in Devonian rocks and represent forms of wingless insects that lived more than 400 million years ago. The fossil records indicate that the class may have developed in a still earlier period.

Scientific classification: The class of insects is arranged in various ways by different entomologists; the following classification is representative. The whole class Insecta is divided into two subclasses: the Apterygota, wingless insects; and the Pterygota, including the great bulk of insects, most of which have wings in the imago form.

The Pterygota are divided into 27 orders: the Ephemeroptera, which includes the mayflies; the Plecoptera, the stone flies; the Odonata, the dragonflies and damselflies; the Grylloblattodea, a small wingless order; the Orthoptera, the katydids, crickets, and grasshoppers (locusts); the Phasmida, the walkingsticks; the Thysanoptera, the thrips; the Dermaptera, the earwigs; the Mantodea, the mantids; the Blattaria, the roaches (sometimes placed together with the mantids in the order Dictyoptera); the Isoptera, the termites; the Embioptera, a small group of subsocial insects living in tropical and subtropical regions; the Psocoptera, the bark lice and book lice; the Phthiraptera, the bird lice and true lice (sometimes separated into the two orders Mallophaga and Siphonculata); the Zoraptera, of which only one termitelike genus (including about 20 species) is known; the Megaloptera, the alderflies and dobsonflies; the Raphidiodea, the snake flies; the Neuroptera, the antlions and lacewings; the Mecoptera, the scorpion flies; the Trichoptera, the caddisflies; the Lepidoptera, the butterflies and moths; the Diptera, the mosquitoes, gnats, and true flies; the Siphonaptera, the fleas; the Coleoptera, the beetles; the Strepsiptera, a group of tiny insects parasitic on other insects; the Hymenoptera, including the ants, bees, wasps, hornets, and ichneumons, and chalcids; and the Hemiptera.