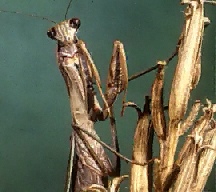 click to enlarge
Photo by:
Ray Coleman/Photo Researchers, Inc.
Mantis, common name for long, slender, winged insect common in warm temperate and tropical regions throughout the world. Also called praying mantis, these insects pass through an incomplete metamorphosis. Mantids are known for sitting back on their rear appendages and holding their stout front pair of appendages together in an attitude reminiscent of prayer. Actually, the green and brown insects are waiting for insects that constitute their food. Mantids are the only insects that can turn their heads from side to side. Their front legs are equipped with sharp spines that enable the insects to grasp and hold their prey. The erroneous belief that the characteristic position of mantids waiting for prey has a religious significance has been the basis of many superstitious tales about them.

The common European mantis reaches a maximum length of about 6.3 cm (about 2.5 in). This species was introduced into the United States to help control injurious insects. It is now widespread in the northeastern part of the United States. The common mantis of the southern United States, the Carolina mantis, is a native species about 7.6 cm (about 3 in) long, which is known in the South as rearhorse or mule killer.