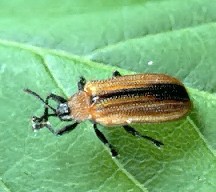 Photo by:
Ron Goor/Bruce Coleman Inc.
Leafminer, name for an insect, the larva of which tunnels inside of leaves or other plant parts. This feeding behavior causes holes in the foliage, discolored patches, or winding trails called mines that are visible through the leaf surface. Several hundred species of leafminers occur in the United States, including certain moths, flies, beetles, and sawflies. Each species of leaf mining insect typically feeds only on a few closely related plants. The species of plant attacked and the characteristic form of the larva's damage help to identify the insect species.

Adult leafminers lay their eggs on plants or insert eggs into plant tissue. The emerging larva chews a tunnel between the upper and lower surface of a leaf. The larval stages of certain species also feed externally and skeletonize the surface of leaves or other plant parts. Most species of leafminers have complete metamorphosis. Mature larvae pupate inside of leaves, on foliage or bark, or drop to the ground, where they develop into an adult. Some leaf-mining species cut away plant parts or use their droppings to construct pillars inside of their mines to keep the leaf surfaces from collapsing inward while they pupate.

The larvae of several different families of small moths are the most commonly seen leafminers. They often infest trees and plants used for landscaping. Severe infestations make foliage unattractive and can slow plant growth, but established woody plants can tolerate extensive foliage mining and are rarely if ever killed by leafminers.

Larvae of small flies, such as the serpentine leafminer, are the most common and damaging leafminers in gardens and vegetable crops. Some of these flies attack many species of herbaceous plants and can severely damage or kill plants they infest.

Leafminers commonly are attached by tiny parasitic wasps, which help to keep leafminer populations in check. Leafminers also can be controlled by planting resistant crops, using screens to exclude egg-laying adults, pruning out and disposing of infested plant parts, by planting new crops away from older infested plants, and by carefully timing application of certain pesticides.