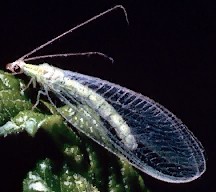 click to enlarge
Photo by:
Steve Solum/Bruce Coleman Inc.
Lacewing, common name for several species of insect characterized by four transparent, many-veined wings that fold in an arch above the back when at rest. The most abundant are the green lacewings, also known as the golden-eyed flies, with a wingspan of about 2.5 cm (about 1 in). Others include the brown lacewings; the pleasing lacewings; the beaded lacewings; and the rare giant lacewings, with a wingspan of 7.5 cm (3 in). Some lacewings are also called stink flies because they emit a disagreeable odor as a defense.

Adult females of green lacewings lay eggs on the tips of long silken stalks spun on leaves or stems of plants. This prevents the first larvae hatched from eating the other eggs. Commonly called aphid lions because they feed on plant lice (among other insects), the larvae camouflage themselves with bits of leaves and twigs to get near their prey. Most strikingly, they evade guardian ants, which "herd" aphids for their sweet secretions by removing some of the fluffy wax that coats the aphids' bodies and placing it on their own backs. In two or three weeks the larvae spin cocoons and enter the pupal stage, from which adults emerge by chewing their way out of the cocoons.