Everything About Mediterranean Fruit Fly 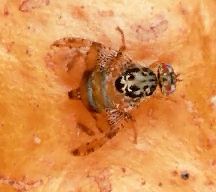 Photo by:
Nigel Cattlin/Photo Researchers, Inc.
Mediterranean Fruit Fly, common name of a notorious pest that destroys fruit. Commonly called medfly, it has infested over 200 species of plants worldwide. Native to the Mediterranean region of southern Europe, this fly is now found in Africa, southern Europe, Central and South America, western Australia, the Hawaiian Islands, and periodically in California, Texas, and Florida.

The adult Mediterranean fruit fly is about 6 mm (0.25 in) long. It has a black and yellowish body with dark bands on its wings. Adults feed on plant nectar, decaying fruit, and other sweet liquids. Each female lays several hundred white, elliptical eggs in batches of one to six under the rind of fruit. They hatch in about two to ten days, depending on the air temperature. Medfly larvae or maggots, are pale-colored and grow up to about 10 mm (0.4 in) long. They devour the pulp of the fruit, making the infested fruit soft and unfit for human consumption.

Like all flies, the medfly has a complete metamorphosis. Larvae complete development in one to four weeks, then drop from the fruit to pupate in the upper soil surface. The oblong, dark brown pupae are about 5 mm (0.19 in) long. One generation can be completed in as little as a month during warm temperatures, so the medfly may have several generations each year. This leads to rapid population growth and is one reason the medfly is such a serious pest, along with its wide range of host plants.

The Mediterranean fruit fly and related species are often accidentally introduced into the continental United States, usually by tourists or by importers who illegally bring in contaminated fruit. Medfly infestations prompt quarantines that make it difficult or expensive to legally ship fruit from infested areas to regions where the pest is not established. Some experts believe that the medfly has established permanent populations in some parts of California and that these flies are the source of recurring infestations there.

Whenever infestations of medflies are discovered, agricultural officials target them for eradication. Eradication projects attempt to kill all the flies before the infestation spreads. Such projects typically involve a combination of methods, including ground or aerial application of insecticides, removal of potentially infested fruit, release of sterile male medflies to disrupt reproduction, and use of synthetic pheromones to attract and capture fruit flies. Because infestations often occur in urban areas and residents may have to submit to frequent spraying of their property, eradication programs often are controversial. In North America, most infestations of Mediterranean fruit flies occur in California, Florida, and Texas, the mild-weather, major fruit-growing regions of the United States. In California alone, local eradication projects against the medfly and other fruit flies have been conducted at least 50 times.