Everything About Blow Fly 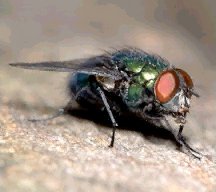 Photo by:
L. West/Bruce Coleman Inc.
Blow Fly, any of a large family of flies known for the habit of the larvae, or immature flies of, infesting animal carcasses. They are found worldwide, occurring nearly every place inhabited by people. Blow flies are slightly larger than true house flies, and the bodies of many are metallic blue or green in color. Worldwide, there are about 1200 species of blow flies, and in North America there are 80.

In many areas such as the American Southwest, blow flies are the most common type of flies found in and around houses and other human habitations. Blow flies range in length from 7 to 16 mm (0.28 to 0.63 in); they have robust bodies and wide heads. The name blow fly comes from the bloated condition of the rotting animal carcasses that their larvae, known as maggots, infest. The most frequent species found under these conditions is the common blow fly. Adult blow flies feed primarily on flower nectar, plant sap, and other sugary materials.

The female blow fly typically lays her eggs on the body of a recently killed animal. The eggs hatch quickly and the maggots then feed on the decaying tissues. In warm weather, some species can complete their larval growth within a week. They then burrow into the soil and pupate, to emerge later as adult flies. Blow flies play an essential role in nature by decomposing dead tissue. The cluster fly species of blow fly is an exception: its larvae prey on earthworms.

Blow fly maggots are important in forensic analyses in cases of homicide and other human deaths. Because the maggots grow at constant rates, their size and stage of development can provide clues to the time and conditions of death. Blow flies have played a role in medicine: species such as the green bottle fly and the black blow fly were once commonly used to clean open wounds in humans because the maggots tend to feed only on decayed tissue.

Some blow fly species, such as the screwworm fly, lay their eggs on living animals. The maggots then feed on the animal's healthy tissue. Because blow flies routinely move between dead animals or dung and human habitats, they may transmit disease organisms to people, including the bacteria that cause dysentery, typhus, and cholera.

Scientific classification: Blow flies comprise the family Calliphoridae in the insect order Diptera, the true flies. They are related to botflies and flesh flies, the larvae of which also live in dead or live animal tissues and dung. The common blow fly is Eucalliphora lilea; the cluster fly is Pollenia rudis; the green bottle fly is Phaenicia sericata; the black blow fly is Phormia regina; and the screwworm fly is Cochliomyia hominivorax.