Everything About Flies: Fruit, House, Crane Flies, Mosquito, Gnat, Maggot, Midge and others 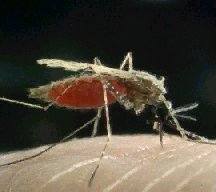 Photo by:
Tim Shepherd/Oxford Scientific Films
Fly, common name for members of an order of two-winged insects, the best known of which are the house fly and mosquitoes. Other familiar flies include crane flies, gnats, black flies, horse flies, and blow flies. Some four-winged insects are loosely termed flies, such as dragonflies, caddisflies, and mayflies. But true flies, which evolved from four-winged insects, possess only a single pair of wings; some are among the fastest flying insects.

There are about 119,500 known species of flies and they make up the fourth largest insect order, after the beetles, butterflies and moths, and bees and wasps. The order is divided into three main suborders. The most primitive suborder is distinguished in that the pupae are obtect, covered by an outer shell with appendages more-or-less glued to the body. In this group, the adult flies are generally slender insects with long antennae and finely veined wings, such as mosquitoes, crane flies, midges, March flies, and black flies. The second suborder is distinguished by somewhat more advanced species that have coarctate pupae, that is, housed within a hard capsule formed by the second to last larval skin. The adult emerges from a T-shaped opening in the pupal case. This group contains the robber, horse, and bee fly families and several others. The final suborder contains highly advanced members with fewer veins in the wings and wide diversity of lifestyles. The adults generally have stouter bodies and short antennae; among them are the house fly, bot flies, fruit flies, and the tsetse fly.

click to enlarge
Microsoft Illustration
Physical Characteristics
Most adult flies are active during the day and rely on their eyes for survival. The compound eyes of flies are large and are composed of thousands of individual lenses, up to 4000 in the case of the house fly. In some species, the compound eyes take up almost the entire head. Fly eyes are very sensitive to sudden movement and some species have very accurate three dimensional vision, such as the robber flies, which grab their prey while in flight. Most flies also have small, simple eyes near the top of the head, probably used to detect light intensity.

Some primitive species of flies do not feed as adults and their mouthparts are very small. However, most flies have highly developed mouthparts that are used for specialized feeding on a wide array of materials. Mosquitoes have piercing-sucking mouthparts, modified into structures similar to a hypodermic needle in a flexible sheath, and feed on blood and nectar. Horse flies have scissorlike cutting blades, which both tear and pierce a victim's flesh. The bee fly has a long proboscis that extends deep into flowers to draw up nectar. Many advanced flies have a soft proboscis, a trunklike organ that branches into a two-lobed tip. The proboscis is applied to wet surfaces, as is commonly seen in the house fly, and sucks up fluids by means of a capillary action and a bellowslike pump in the head.

The six legs of flies each have a tarsus, or foot, with a pair of tonglike claws used for gripping rough surfaces. Beneath the claws is a fleshy, glandular adhesive pad called a pulvillus, which is used on smooth surfaces and accounts for the house fly's feat of walking across ceilings.

Flies are the only major group of insects that have only a single pair of wings. The rear wings are vestigial, reduced to small knoblike structures known as halteres. The halteres vibrate vertically at the same rate as the forewings and act as gyroscopes. They enable the powerful forewings to thrust the insect forward without sending it into a nose dive, and may act as rudders, to keep the insect on a steady course.