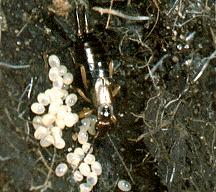 Photo by:
Dorling Kindersley
Earwig, common name for any member of an order of nocturnal insects found throughout the world. Earwigs are small, slender, and dark colored. They have pairs of horny, forcepslike abdominal appendages, which are larger in males than in females. Most species are winged, but they seldom fly. Earwigs undergo incomplete metamorphosis. The tropical species of earwigs are brightly colored and carnivorous. In the United States, they abound in the South, where they live under the decayed bark of trees, under stones, and in old straw and feed chiefly upon flowers and ripe fruit. Earwigs were so named because of the erroneous belief that they sometimes creep into human ears. They are completely harmless to humans but are known to transmit virus diseases that affect plants. The name earwig is also applied in the United States to several small centipedes.