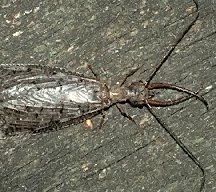 click to enlarge
Photo by:
Bill Beatty/
Animals Animals or Earth Scenes
Dobsonfly, common name for any member of a family of often large, stout-bodied, net-winged aquatic insects. They are found nearly worldwide. Larvae are called hellgrammites or dobsons and are sometimes used as fishing bait. In midsummer, dobsonfly females lay eggs on leaves or rocks overhanging water, into which the larvae drop when hatched. The larvae are fierce predators, feeding on small aquatic animals; they are sometimes cannibalistic. The larvae remain in the water for up to three years, sometimes reaching a length of 5 cm (2 in). They then move to land, where they pupate under stones and emerge as adults in about one month. The adults, although large, are weak flyers.

Small species of dobsonflies are also called fishflies. Dobsonflies are often confused with a closely related family, the alderflies. The alderfly larva has compound eyes and a central tail filament, while the hellgrammite has simple eyes and short, paired tail filaments. The giant dobsonfly is the largest United States aquatic insect. It occurs in the eastern states. The brownish-green adult of this species is about 7.6 cm (about 3 in) long and has a wingspread of nearly 13 cm (nearly 5 in); the male has slender mandibles that can be up to 2.5 cm (1 in) long.