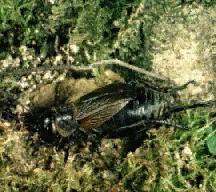 Photo by:
G.I. Bernard/Oxford Scientific Films
Cricket (insect), common name for insects of a family characterized by the chirping courtship call of the male and by the needlelike or cylindrical ovipositor (organ at the end of the abdomen where eggs are deposited) of the female. The male produces his courtship song by rubbing a grooved ridge on the underside of one of his front wings against the sharp edge of the other front wing. True crickets include the familiar black field cricket and the house cricket.

Crickets have long antennae and hind legs adapted for jumping; organs for hearing are located on their front legs. Solitary by day, crickets remain in crevices, under rocks, or in shallow burrows dug in the soil, emerging at night to feed on plants. During breeding season, the male cricket attracts a female with his call, sometimes driving off other males that intrude on his territory. The call is distinctive in each species. The snowy tree cricket varies its chirping according to the air temperature. The temperature in Fahrenheit degrees can be estimated simply by adding 40 to the number of its chirps in 15 seconds. In most crickets, after mating the female uses her long, spearlike ovipositor to insert eggs into the soil or plant stems. The young, called nymphs, resemble the adults. They reach full size after 6 to 12 molts during which they shed their outer covering; as adults, they usually live six to eight weeks. 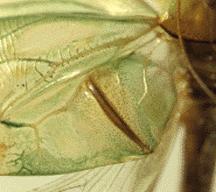 click to enlarge
Photo by:
Dorling Kindersley
In addition to true crickets, several other related groups of insects may be loosely referred to as crickets. These include the cave and camel crickets, mole crickets, Jerusalem crickets (also called sand or stone crickets), and pygmy mole crickets.