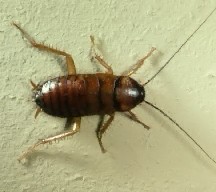 Photo by:
G.I. Bernard/Oxford Scientific Films
Cockroach, common name for an order of insects, the most familiar of which are characterized by their oval shape, foul odor, and their status as household pests. About 4000 species are known worldwide; most inhabit the warm tropical regions of the globe. About 25 species have attained worldwide distribution due to accidental transport in commerce and their affinity for human habitation. Among these are most of the important pest species. Cockroaches are an ancient group, having changed little in appearance in 320 million years. Fossil records indicate that they were the predominant insects during the Carboniferous period 345 to 280 million years ago.

Common pest cockroaches include the American, German, Oriental, Madeira, and brownbanded. The Asian cockroach began to cause concern in the United States when it appeared in large numbers in Florida in the late 1980s. All but the American cockroach are introduced species to North America.

Characteristics
Cockroaches in general are flat and oval in outline. The head points downward and is protected by the enlarged flanges of the thorax. In many other respects they are similar in morphology to grasshoppers, crickets, katydids, stick insects, and mantids, their closest relatives. Cockroaches may be winged or wingless, but even winged species do not always fly. Adults range from 1 mm (0.04 in) to more than 9 cm (3.6 in) in length. They are sensitive to light; most species prefer darkness, being largely nocturnal. Their long, hairlike, highly sensitive antennae and sensory bristles enable them to detect tiny amounts of food and moisture. The cerci, sensory structures extending from the rear of the abdomen, can sense minute air movements, enabling the cockroach to rapidly detect and flee from potential danger. Most cockroaches can run very rapidly and are difficult to catch due to their soft, slippery outer skin, called the cuticle. They can hide in very narrow crevices. The oily cuticle also protects them from dehydration. Individual species may be restricted to very specific habitats such as leaf litter, bromeliads, the splash zone of waterfalls, or bat caves. Some species are brightly colored, defying the stereotype of the drab, brown or black household roach. Some species, including the Madeira cockroach, can produce sound.

Life Cycle and Reproductive Behavior
Courtship patterns vary with the species. When the American cockroach is ready to mate, the female produces a chemical odor, or pheromone, that attracts males. The males flap their wings and probe for females with their abdomens when they sense the pheromone; eventually, they back into a female and mating ensues. Other species have more elaborate mating displays, including hissing noises, bobbing and waving of the abdomen, or nibbling. The males of one African species form dominance hierarchies, and the females preferentially mate with the dominant male.

The fertilized eggs that result from mating are cemented together by the female in a sausage-shaped egg case known as the ootheca. The American cockroach simply deposits the ootheca in a protected place and abandons it. German cockroaches keep the ootheca extended from their egg-laying organ, known as the ovipositor, depositing it only when the eggs are ready to hatch. An ootheca contains from 16 to 32 eggs, depending on the species. Female ootheca-tending cockroaches sometimes display maternal care. The nymphs that emerge from the eggs often remain around their mother for several days. Nymphs undergo gradual metamorphosis-that is, they grow and mature in stages, each separated by a molt of the exoskeleton. Each successive stage, or instar, comes to resemble the adult insect more and more. The final molt gives rise to a winged, sexually mature individual.