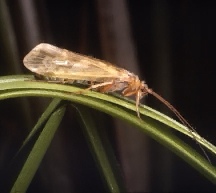 Photo by:
G.I. Bernard/Oxford Scientific Films
Caddisfly, common name for certain aquatic insects that resemble small moths. The wings of caddisflies are covered with small hairs, distinguishing them from the scaled wings typical of moths. About 4500 species exist worldwide; some 1000 species are known in North America. The adults are 1.5 to 2.5 cm (0.6 to 1 in) long. Most have a habit of nocturnal flight and are found near fresh water; a few are marine. Caddisfly eggs are deposited in green, gelatinous masses and are usually attached to water plants. The larvae, called caddisworms, caseworms, or cadbait (from their wide use for bait by anglers), are aquatic. The caddisworm is elongate with a small, hard head and a soft thorax and abdomen. For protection the larva lives in a characteristic tubular silk case covered with sand grains, bits of shell, twigs, or leaves. Most caddisworms are herbivorous; several species, however, also eat small aquatic animals, which they catch in nets spun from secreted silk and anchored in running water. After several months in the larval stage, the caddisworm closes the mouth of the case and pupates. At the end of the pupal stage the pupa rises to the water's surface, and the adult quickly emerges and flies away.