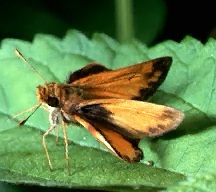 Photo by:
Ron Goor/Bruce Coleman Inc.
Skipper (butterfly), common name for any of a large and diverse group of flying insects closely related to true butterflies. There are more than 3500 recognized species of skippers worldwide, with the greatest diversity occurring in the tropical regions of Central and South America.

Named for its fast, erratic, skipping flight, the skipper has smaller wings and a more stout, hairy body than the true butterfly. Its distinctly triangular wings measure 1.5 to 6.5 cm (0.6 to 2.6 in) across. The skipper begins life as a tiny egg, less than 0.01 cm (less than 0.004 in) in diameter, much smaller than most butterflies or moths. Before skippers become adults and develop wings, they spend part of their life cycle as hairy, wormlike larvae called caterpillars.

The skipper's small size and rapid flight make it difficult to identify in flight. Some of the major skipper groups can be distinguished by how they hold their wings when basking in the sun. For instance, branded skippers hold their wings partially open while basking, with the front wings and hind wings held at different angles-a posture rarely seen in true butterflies. They are usually orange, rust, or brown in color. As caterpillars, most feed on grasses or sedges. In contrast, spread-winged skippers bask with their wings held wide open. They are usually brown, black, or checkered, but some are brilliantly colored. One spread-winged species, the long-tailed skipper, has iridescent blue-green wings and long tails on its hind wings that extend far behind its body. Its caterpillars are significant pests on beans in parts of the southern United States.