Everything About Butterflies and Moths: Caterpillars, Monarch Butterfly, Viceroy, Skipper and others

More about Butterflies and Moths 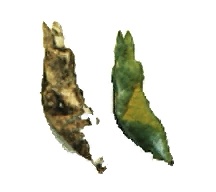 Photo by:
Dorling Kindersley
Coloration and Mimicry
The colors and patterns of the wings of butterflies and moths help to protect the organisms against predators. Some species possess eyespots or other markings that draw the attention of enemies away from vital body parts to the wings. In many species, cryptic coloration-wings that look like the natural background of soil, bark, and leaves-provides camouflage, protecting the insects from visually hunting predators. 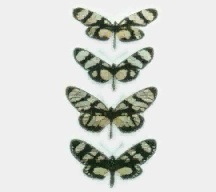 Photo by:
Dorling Kindersley
The most intricate evolution is exhibited by butterflies with particularly bright or warning coloration. Some of these species deposit in their own tissues toxic chemicals from larval host plants that make the insects distasteful or poisonous to vertebrates. Butterflies of this sort are often marked with yellow, orange, or red on a dark background to warn predators of their unpalatability. In many locations, especially in tropical areas, edible butterflies and moths have evolved wing patterns that mimic inedible species, thus gaining protection for themselves. 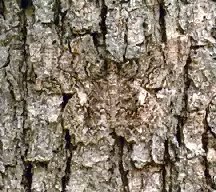 click to enlarge
Photo by:
John R. MacGregor/Peter Arnold, Inc.
This phenomenon has been called Batesian mimicry, after its discoverer, the 19th-century English naturalist and explorer Henry Bates. Another type of association, Mullerian mimicry, occurs when several distasteful species that share a similar warning coloration fly together to reduce predation on each individual species. Predators are presented with a single danger-signaling pattern that is easier to recognize.

Importance
Long studied by amateurs who have produced a large body of biological and distributional information, butterflies have become a key test group for ecological and evolutionary research. 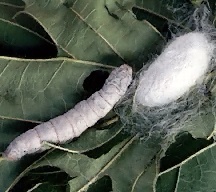 click to enlarge
Photo by:
Wardene Weisser/Bruce Coleman Inc.
They are particularly useful for genetic experiments, are easily monitored in the field, and are thought to be representative of most herbivorous insects, humanity's most important competitors for food. They also serve as key indicator species of environmental disruption.

Some moth species are among the most destructive pests of crops and stored products; however, very few butterfly species attack economically important plants. Many species of butterflies and moths are directly useful to humans. The silkworm moth is the primary example; its pupal cocoon is the source of commercial silk. Some species are eaten as protein-rich food, including silk moth pupae in Asia and many caterpillars in Africa. 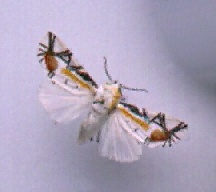 Photo by:
Dorling Kindersley
Butterflies have been a symbol of beauty in human culture since before recorded history. Butterfly collecting has always been a popular activity for some. However, butterflies are vulnerable to overcollecting, especially where their habitats have been damaged or limited. They are increasingly protected by laws that forbid collection without a permit and their importation from other countries. The value of butterflies has given rise to special butterfly farms where particularly attractive species are reared in great numbers to supply the trade in collected specimens. Some butterfly parks provide a protected habitat where the public can view live butterflies close up.

Evolution
Few fossils of butterflies and moths are known. Two records of primitive moths, more than 70 million years old, were found in Cretaceous amber. The earliest known butterfly fossils are those from Green River Shale in Colorado; they are about 48 million years old.