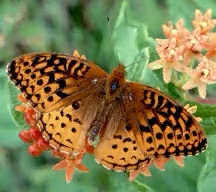 Photo by:
John Gerlach/
Animals Animals or Earth Scenes
Fritillary (butterfly), group of large and ornate butterflies found in temperate regions throughout North America, Europe, and Asia. Fritillaries are members of the brush-footed butterfly family, so called because their front legs resemble a pair of brushes, which are used for chemical sensing rather than walking. The adult fritillary is most frequently found along forest edges and streams and in wet meadows or woodlands. It spends much of its time basking in the sun or collecting nectar from thistles or other flowers, sometimes in large numbers. The fritillary typically basks while perched on flowers or stems with its wings wide open and its back turned toward the sun.

The wingspan of the fritillary ranges from 4 to about 10 cm (1.5 to about 4.0 in). Fritillaries are typically vivid orange on the upper wing surfaces with black or brown markings. The undersides have rows of metallic silver or other spots. In most fritillary species the males and females are similar in wing color pattern, and females are typically larger than males. An exception is the Diana fritillary in which the males are orange and black above with silver spots below and females are iridescent blue-black with rows of white spots above, and charcoal black below. The color pattern of female Dianas mimic those of a distantly related butterfly, the pipe vine swallowtail, which is distasteful to birds and other potential predators.

Most fritillaries reproduce only once each year in temperate areas. In summer or early fall, the female will lay its eggs on or near violets, its host plant. Tiny caterpillars hatch from the eggs, and they spend the winter in a resting stage, called diapause, and resume growth and development in the spring. The mature caterpillar is typically black or dark brown with black or orange spines.

Another fritillary group, the lesser fritillaries, are similar in general wing pattern but are usually darker and smaller in size and live at northern latitudes in North America, Europe, and Asia. Some species are restricted to arctic and alpine regions where they are often seen basking with their hairy bodies and dark wings pressed against the ground or on rocks. Lesser fritillaries use a wider variety of host plants than other fritillaries, including violets, willows, bistort, and mountain avens.

Scientific classification: Fritillaries are members of the brush-footed butterfly family Nymphalidae. The genus Speyeria is found in North America whereas the genus Argynnis is found in Europe and Asia. The genera Boloria, Clossiana, and Proclossiana make up the lesser fritillaries. The Diana is classified as Speyeria diana.