Everything About Cecropia Moth 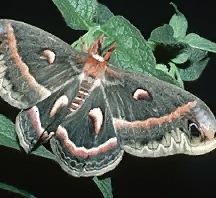 click to enlarge
Photo by:
Bill Beatty/
Animals Animals or Earth Scenes
Cecropia Moth, common name for a large American silkworm moth. Cecropia, the largest moth native to the eastern United States, has a wingspread of 15 to 18 cm (6 to 7 in). The reddish-brown wings are bordered with red, white, and gray markings with an outlined white crescent-shaped mark in the center. The larva is about 10 cm (about 4 in) long, bluish-green, and covered with rows of blue, yellow, and coral-red tubercles, or knoblike projections. The larvae feed on the foliage of many forest and fruit trees.

Scientific classification: The cecropia moth belongs to the family Saturniidae. It is classified as Hyalophora cecropia.