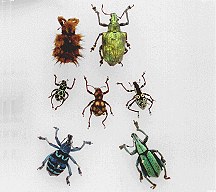 Photo by:
Dorling Kindersley
Weevil, common name for most members of a superfamily of beetles. The adult weevil is usually dull in color and herbivorous, characterized by a prolongation of the anterior part of the head into a rostrum (a beaklike extension). The apex of the rostrum contains the biting mouthparts, and two clubbed antennae are attached in depressions at each side. The oval body is covered with a rough, hard integument, and a single median suture traverses the lower part of the head. Weevils exhibit complete metamorphosis; the larvae are white, semicircular, fleshy grubs with vestigial legs, strong jaws, and rudimentary eyes; they feed entirely on plant life, causing much damage to crops. The adults usually hibernate for most of the winter.

The largest family comprises several subfamilies and contains 30,000 to 40,000 species. The characteristic genus of this family, which contains the nut and acorn weevils, has species characterized by a bulky body and a long, slender beak. In the female, the beak is usually longer than the entire body; it is used for drilling holes in nuts or acorns and for placing the eggs in the kernels. (Squirrels often open acorns in search of the larvae.) When the nuts fall to the ground, the larvae burrow underground, and they pupate the following July. The adults average 0.7 cm (0.3 in) from the front margin of the head to the tip of the abdomen. Some weevils of this family spend much of the adult and larval stages within various fruits.

The tiny granary weevil is chestnut brown or black. The females produce numerous eggs six times a year and deposit them inside the grain kernels. The similar rice weevil is native to India and infests rice and other grains throughout the world. It is a common pantry pest, found frequently in crackers, packaged cereals, or other dried foods. The alfalfa weevil, native to Europe, causes extensive damage to the leaves of the alfalfa crop. Brought to Utah in the early 1900s, it spread later into all the Rocky Mountain states and, more recently, into California and Washington.

Another group of beetles commonly known as weevils but more closely related to the leaf beetles are the bean or pea weevils. The pea weevil lays numerous eggs once a year on the pods of young peas, the larvae boring into the seed to pupate. The bean weevil lays eggs on or within the bean pod.

Control
Weevils cause millions of dollars worth of damage every year. Common methods of control are burning infested fruits, nuts, or stems; plowing the ground in which the insects pupate; and spraying crops with insecticides.