Everything About Tiger Beetle 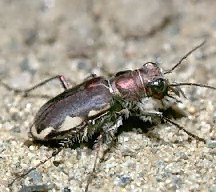 click to enlarge
Photo by:
Ted Levin/
Animals Animals or Earth Scenes
Tiger Beetle, common name for predacious beetles that are generally metallic golden-green in color, with spots or stripes on the wing covers. About 1500 species are known, the majority inhabiting the tropics. Some species are wingless, whereas others are active fliers. Most are generally found in sandy terrain, some only on the mounds of termites, and others on the trunks of trees, which they ascend in a spiral manner. Both adults and larvae prey on other insects, and adults also eat worms and snails. The larvae of many dig tubes in moist sand, closing the holes with their heads, and seize unwary passing insects and drag them below to be devoured.

The largest American tiger beetle is found in sandy regions in the midwestern United States. One genus contains more than half of the species in the entire family and includes most of the forms that are found in North America.

Scientific classification: Tiger beetles make up the family Cincindelidae of the order Coleoptera. The largest American tiger beetle is classified as Amblycheila cylindriformis. More than half of all tiger beetles are classified in the genus Cicindela.