Everything About Metallic Wood Borer 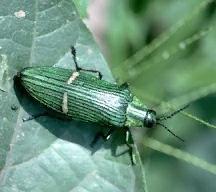 click to enlarge
Photo by:
Fletcher & Baylis/
Photo Researchers, Inc.
Metallic Wood Borer, member of a large family of beetles known for the metallic sheen of some species and the wood-boring habits of the larvae. They are also called jewel beetles or buprestids. About 14,000 species of these beetles occur throughout the world, and about 675 species are found in North America.

Metallic wood borer adults are somewhat flattened and tapered at the hind end. Most are 6 to 25 mm (0.25 to 1.00 in) long, although some tropical species may reach 5 cm (2.0 in) or more in length. Adults of some species are metallic copper, blue, black, or green-particularly on the wing covers and undersides. Some species are the mottled colors of bark and are perfectly camouflaged in their natural habitat. Metallic wood borers are usually difficult to catch. Most adults can run or fly quickly and some drop from their perches into the undergrowth when disturbed. Adults feed on leaves or flowers, although the damage they cause is usually minor. These beetles typically have an extremely tough outer covering, and specimens can be difficult to mount on pins.

Female metallic wood borers lay their eggs in bark crevices. After hatching, the yellowish to white larvae tunnel beneath bark and sometimes into the wood. They are known as flatheaded borers because the head and thorax are flattened and wider than the rest of the wormlike body. Larvae usually stop feeding, form a pupa, and undergo metamorphosis in the feeding tunnel. When the adults emerge, they make holes in bark that often are D-shaped and about 3 to 6 mm (0.13 to 0.25 in) in diameter. Metallic wood borers typically have one generation of young each year.

Many woody plants are attacked by metallic wood borers. However, only a few species are regarded as pests. Feeding by larvae can cause wet spots, dark staining, and gnarled, ridged growths on bark. Portions of the bark may crack and die. Infested limbs or entire trees, especially young trees, may be killed. The Pacific flatheaded borer and the flatheaded appletree borer are two common species that attack shade and fruit trees. Other common species include bronze borers, which infest birch and poplar trees, and the twolined chestnut borer, which attacks oak and chestnut. Protecting trees from injuries and providing plants with proper nutrients and a healthy growth environment generally prevents attack by metallic wood borers. Most metallic wood borers attack only dead or dying trees, which they help to decompose so nutrients are available for new plant growth.

Metallic wood borers have considerable artistic and cultural value in many nonindustrialized cultures and, increasingly, as novelty items in modern commerce. The wing covers and sometimes whole beetles are used as jewelry. Rare and colorful species are prized by insect collectors. Like the longhorned beetles, the larger species of metallic wood borers have lengthy life cycles and slow population growth. Habitat destruction, especially of forests, and overzealous collecting may endanger them to the point of extinction.