Everything About Ladybird Beetle 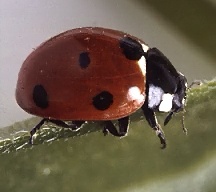 Photo by:
Jerry Young/Dorling Kindersley
Ladybird Beetle or Ladybug, common name for any of numerous related species of brightly colored beetles found in temperate and tropical regions throughout the world. The ladybird beetle is less than 1.2 cm (less than 0.5 in) in maximum length. It has a nearly hemispherical body, rounded above and flat below, a small head, and short legs. Ladybird beetles are often red or orange above, spotted with black, white, or yellow. Some species are black, with or without spots. The larvae are also brilliantly colored, often blue, with stripes of orange or black.

All the ladybird beetles, with the exception of the members of one vegetation-eating genus, are carnivorous. In both the adult and larval stages they feed on insects harmful to plants, such as aphids and scale insects. Because of the help ladybird beetles render farmers in destroying agricultural pests, the beetles were popularly regarded in the Middle Ages as instruments of benevolent intervention by the Virgin Mary, whence the common name ladybird.

A common North American species of ladybird beetle, the nine-spotted ladybug beetle, is orange above, spotted with black. Adults of the two-spotted ladybug beetle often hibernate in houses during winter. This beetle is orange above, with a single large black spot on each elytron (protective outer wing). The convergent ladybug beetle is a western American species, the adults of which commonly swarm in large numbers on mountain peaks. These swarms are collected by western agricultural firms and are distributed to farmers for aphid control. The vedalia, an Australian species, has been imported into California to fight the cottony-cushion scale insect, which attacks citrus trees.

A few ladybird beetles are injurious to humans. The Mexican bean beetle is the most serious of these agricultural pests, feeding on the leaves and pods of bean plants. This beetle, which has spread throughout the United States, is brownish-yellow above, marked with eight black spots. The squash ladybird feeds on the leaves of plants of the gourd family.