Everything About June Bug 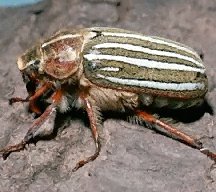 click to enlarge
Photo by:
George K. Bryce/
Animals Animals or Earth Scenes
June Bug, common name for any of several beetles in the scarab family, also called June beetle. The adults are most common in June. In the northern United States, the name is applied to the numerous species that are known as May bugs in the southern United States, where they emerge earlier. The brown, stout-bodied adults are about 25 mm (about 1 in) long and feed on leaves. The larvae, known to horticulturists as white grubs, burrow in soil, feed on the roots of plants, and often damage grass lawns. The larval stage persists for two to three years.