Everything About Japanese Beetle 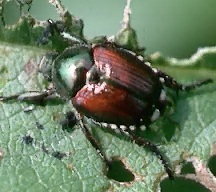 click to enlarge
Photo by:
John A. Lynch/Photo/Nats
Japanese Beetle, insect pest of the scarab family. The Japanese beetle was introduced accidentally into New Jersey from Japan in 1916 and is now widespread over the eastern United States. The adult has a broad, thick body about 1.3 cm (about 0.5 in) long and is iridescent green, with tan wing covers. It attacks the foliage of a wide variety of plants and also eats their fruit, causing widespread destruction. The Japanese beetle is most common in July and August, at which time the female lays its eggs 13 to 15 cm (5 to 6 in) below the surface of the ground. The white grubs (wormlike larvae) feed on the roots of grasses until fall, when they descend 30 cm (12 in) or more underground and hibernate; they emerge in midspring and pupate in June after attaining a length of slightly less than 2.5 cm (less than 1 in).

Parasitic wasps, largely responsible for the control of the insect in Japan, were imported into the United States in the 1920s; they reduce the beetle population by preying on the grubs. The grubs are also subject to certain diseases caused by bacteria, fungi, nematodes, and viruses. The most important biological controls are milky disease and a virus infection called blue disease.

Scientific classification: The Japanese beetle belongs to the family Scarabaeidae in the order Coleoptera. It is classified as Popillia japonica.