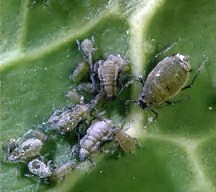 Photo by:
J.A.L. Cooke/Oxford Scientific Films
Aphid, common name for any of a large group of insects, also popularly called plant lice or green flies. Aphids are found worldwide as parasites on the roots, leaves, and stems of plants, to which they frequently do great damage. The mouthparts of aphids are adapted for piercing and sucking plants and consist of four long, sharp stylets within a proboscis (sheath). Two projecting cornicles, or horn-shaped tubes, at the posterior end of the body emit a waxy secretion. The legs are long and slender but are not adapted for rapid movement; aphids rarely wander far from their birthplace, except during the spring and autumn migratory flights of the females. In autumn the females lay fertilized eggs that survive the winter in crevices and hatch in the spring, producing wingless females that reproduce parthenogenetically (without fertilization from males). The time of development is so short that the eggs sometimes hatch before they are laid. After several generations, winged females are produced; they then migrate to other plants and continue asexual reproduction of wingless females. Toward the end of summer, winged males are produced, which fertilize the winter eggs.

The presence of aphids is readily detected by marks, wrinkles, or abnormalities on the infested plant. Aphids emit from their anus a sweet glutinous substance called honeydew, which is eagerly sought by ants and other insects; ants may hide aphids and protect them from predators. Aphids that feed on such plants as turnip, cabbage, potato, bean, apple, pear, and larch have been the cause of widespread damage, often as a result of transmitting plant viruses. Birds, spiders, parasitic wasps, hover-fly larvae, and lady beetles destroy great numbers of aphids.