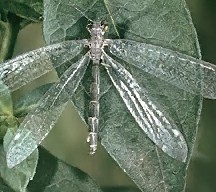 click to enlarge
Photo by:
E. R. Degginger/
Animals Animals or Earth Scenes
Antlion, common name for an insect larva that digs a funnel-shaped pitfall in fine, loose sand and lies in wait at the bottom for its prey, which consists of ants and other insects that tumble into the pitfall. Hundreds of antlion species are distributed throughout the tropical regions of the world. More than 50 North American species are known, some of which are common in the southern United States. A full-grown antlion is usually about 1.0 cm (about 0.4 in) long and has large, powerful jaws. It pupates in a sand-covered cocoon during the spring; the adult emerges from the cocoon after metamorphosis. It is a delicate-winged, usually gray or brown insect that resembles a damselfly. Antlions are also known as doodlebugs.

Scientific classification: Antlions make up the family Myrmeleontidae of the order Neuroptera.